Strategic Communications major at UW-Madison. I dig good food, good times and most importantly, good friends! Vocalist/Guitarist on the side. Music=Love.

Our featured guests this Friday, Main Street Wisdom, have to be some of the happiest people I’ve ever seen. I mean, look at those big smiles! Instead of staring at your tedious final assignments, why not start the week off with some down-home folky cheer in the Rath?

Main Street Wisdom came together as the unlikely collaboration between singer Carleen Wild, a journalist-turned-musician, and guitarist Dan Smith, a musician-turned-journalist-turned-musician. Wild and Smith met while working at WISC-TV in Madison. They had discovered mutual interests in music while working at the station, but busy work schedules had prevented them from creating a group and playing steady gigs. Eight years later, in 2009, Wild’s life had become a bit less…wild. She sent out a Facebook post about wanting to start a formal band. Dan Smith jumped on board, and brought his son Ben on board as well. Ben and Dan Smith bonded over the guitar after father Dan brought one home for a teenage Ben and taught his son three chords. Main Street Wisdom also includes Chris Krueger and Jim Usleman, two friends of Wild’s who responded to her 2009 post.

The group describes their sound as, “an eclectic mix of new and old country flavored music mixed with a few originals.” One can hear these influences on “Toasting a Memory,” written by Wild, Arenz and Smith. Wild mixes smooth country flare with powerful belted notes to keep the tunes fresh and energetic. Dan and Ben Smith assist with the vocal lines, while jiving with the chilled-out vibe that the rest of the instrumental section gives off.

The bluegrass Oak Street Ramblers sextet consists of Ian Alderman on guitar and dobro, Willie Jones on mandolin, Jeff Kunkle on bass, Betty Stattelman-Scanlan on guitar, Mark Schlutt on banjo and Tina Thompson on fiddle. Crafting a sound along the lines of Flatt and Scruggs and Jimmy Martin, the Ramblers make music that, according to their website, “wouldn’t sound out of place at a barn dance circa 1954.” The musicians first came together in 2004 at Madison’s Wonder’s Pub. Eight years later, they have released their own self-titled CD, and they’re reputed to be one of Madison’s best bluegrass groups. The album was nominated for the best bluegrass/country MAMA (Madison Area Music Award) in 2012, and the group is even featured on Season’s Greeting, a holiday compilation from Madison, WI bands. In a 2010 Isthmus poll, the Oak Street Ramblers were voted second-best bluegrass or folk act, and they perform regularly at anywhere from the Brooklyn Bluegrass Festival to the popular Barrymore Theatre.

“Wagon Wheel” demonstrates the “tight vocal harmonies” on which the Ramblers sell themselves. One may find up to five of the members singing at any given time! Jones and Stattelman-Scanlan harmonize for the majority of the song, and their blend combined with the instrumentation exudes a delightful bluegrass charm.

Check out both tracks below! And don’t forget to see them live this Friday for a fun, free stress reliever!

With our Western capitalist economy, and our resulting materialistic society, it’s easy to be envious of what others have that you might be “lacking.” At the same time, we all know that it’s hard to stand out from the pack when you’re simultaneously trying to “fit in.” Well, our guest this Saturday is working to overcome both of these human flaws through his rich poetry and creative spirit.

R.O.E. (Real name: Roosevelt Sledge Jr.) literally stands for “Rising Over Envy,” because that is one of his primary motivations in his music career. A native of Chicago’s East side, Sledge had a knack for creative writing and poetry at a young age. In high-school, he combined these talents – which had previously netted him multiple awards – with an interest in hip-hop. Just like a fantastic peanut butter and jelly sandwich, R.O.E. has worked these two elements into something that’s both delicious and nourishing to the senses.

His career began to take off after he was noticed by a wide array of music blogs and websites, which gave his freestyles rave reviews. The Chicago Red Eye took notice of R.O.E. and featured him in their daily newspaper. Shortly afterwards, the Chicago Tribune invited him to play at the Chicago Theatre for their “Chicago Live” show.

R.O.E. recently released his latest mixtape, A Backpacker named R.O.E., which can be found on his official website. Stacked with slick hip-hop beats and driven by R.O.E.’s soulful lyrics, it has become popular with college crowds across the country.

The EP’s lead single, I Won, features R.O.E.’s smooth lyrical flow over a blaring collection of brass horns. The instruments are turned down to keep the track energetic, but “chill” at the same time. He speaks to the struggle of working hard for what you believe in, when he raps, “through the ups and downs I try to remain focused/the lyrics I’m spittin’ is efficient and potent.” While relatively short at only 2:40, “I Won” squeezes in relatable lyrics, soulful vibes, and features female vocals from his guest performer Brecan Bland.

Check out the full track below. If you like what you hear, again, you can download his EP (legally!). And of course, come see him do his thing live and in-person this Saturday! 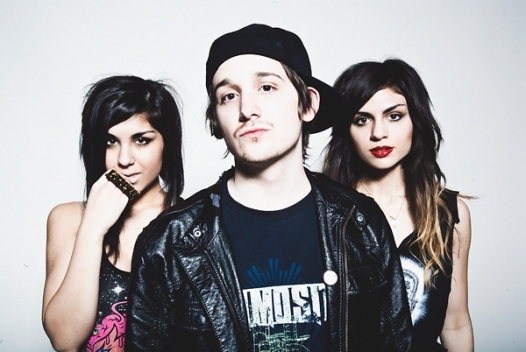 Everyone knows Mondays suck…so I’ll start this post with a joke!

Two aliens are transmitting signals from their home world to Earth, in order to establish contact with the human race. The first alien asks, “Did they get our message?” The other one responds, “Well, yes, but they called it dubstep and started dancing to it.”

Har har! Oh, that one kills me. But let’s be real, dubstep is becoming one of the hottest musical genres for high school and college-aged kids. Problem is, with this popularity comes approximately 2847294 basement DJs who think that all they need is Pro Tools, and knowledge of how to make a “bass wobble,” in order to create their own professional dubstep tracks. Thus, it’s hard to wade through all of the amateur producers to find talented, experienced artists.

Ladies and gentlemen, I have done your homework for you. Allow me to introduce you to an up-and-coming electronic/dubstep group that truly does the genre justice.

Krewella, based out of Chicago, IL, consists of producer “Rain Man” (real name: Kris Trindl), and sisters Jahan and Yasmine Yousaf. While Rain Man is taking care of the crisp beats and dirty drops, one sister throws in rapped vocals, and the other one sings. The result: a fast and furious wall of sound that will make even the most stiff-kneed gentleman want to shake his booty.

The group released their debut EP, Play Hard, on June 18th of this year through Beatport, a popular online DJ music store. It was subsequently released on June 26th through iTunes. The EP shot to the top of Beatport’s charts on release, and peaked at #5 on iTunes’ dance charts. Krewella rose to fame when their video for “Killin’ It,” a track off Play Hard, hit the interwebs in early 2012. The group transformed this popularity into an extensive tour across the US that’s going on until the end of the year.

On November 24th, they will travel to Australia to perform multiple days during Stereosonic, a popular electronic music festival. To give you an idea of the festival’s musical caliber, Tiesto, Avicii, Bassnectar, Flux Pavillion, Calvin Harris and Infected Mushroom will also be performing.

Alright, enough of me building these guys up…here’s a taste of what Krewella has to offer. But please, do this humble blogger one more favor: don’t watch the videos on any quality setting below 720p. It just doesn’t do the music justice.

What’s up party people? You’re in for a special treat this Friday, because we’re showcasing a 21-year-old up-and-coming star who’s already been recognized by top talent in the industry.

Rockie Fresh (real name: Donald Pullen) is coming to you from the South Side of Chicago. He got his stage name when he competed in rap battles during the lunch hour of high school. After graduating, he dropped his 2009 mixtape, Rockie’s Modern Life, followed by his second mixtape, The Otherside, in 2010. Fresh started building a following between these two releases, which lead him to his most recent mixtape, 2012’s Driving 88. What’s up with the name? The mixtape name and cover (a picture of a decked-out Delorean) refers to the 1985 movie Back to the Future. In the movie, as he is analyzing the now-famous time-traveling car, character Dr. Emmett Brown exclaims, “If my calculations are correct, when this baby hits 88 miles per hour…you’re going to see some serious shit.” Hip-hop and science fiction don’t usually mesh, so you know Fresh is something special…but that’s not the only way he is unconventional. Indiehiphop.net gave Driving 88 a 4/5 rating, remarking on how it “breaks down two well-loved musical styles.” They’re referring to Fresh’s unique connection to alternative rock, and how the genre has influenced his hip-hop. In fact, Fresh has contributed to the popular alt-rock group Good Charlotte’s mixtape “The Madden Brothers: Before the Fame.” He even toured with Fall Out Boy’s Patrick Stump, who Fresh has cited as one of his biggest musical influences.

Driving 88 caught the attention of some of hip-hop’s heavy hitters, including both Rick Ross and Shawn “Diddy” Combs. This commenced a short bidding war between the two music moguls. Fresh eventually signed to Ross’ Maybach Music Group because, as Fresh puts it in an interview with HipHopDX, “Me and Ross kind of connected on a young dude level. He really trusted my direction as far as what I want to do for my generation.”

Fresh is a young, fresh face on the scene, and it’s only going to become more evident in the coming months.  Here’s a taste of what he offers: